Continuing from last week on how to do hinge exercises better, let’s talk about squats! Squats are another fundamental movement pattern that everyone should be able to do some form of. They look similar to a hinge, but one big difference is that your knee and hip angles at the bottom of the movement should be very similar (a hinge places more angle change at the hip than the knee) so a squat pattern exercise is going to train the quads AND the
hips.

Now there are a few anatomical differences you need to know about if you look at a video of someone squatting a crap ton of weight and going deep and then look at yourself and it doesn’t look like that. We’re not all built the same. Femur (thigh bone) length varies between people as well as the ratio of thigh length to lower leg length. These differences will influence how your squat looks. You don’t see many people with long legs that are good at squatting deep. They reach a certain point and due to mechanics, they end up getting deeper by bending more at the hips. This is OK, nothing is wrong with you and nothing is going to fix this much. Possibly elevating the heels on a wedge will clean it up to an extent.

Another anatomical difference is the orientation of your hip socket on your pelvis. Does it sit more forward or posterior (anteverted vs retroverted)? You might not know exactly unless you do some movement assessment or look at an X-Ray, but if your hip sockets are more anteverted, you are good at hip flexion and are likely better at squatting deeper. This socket orientation will also play into the width of your feet and what feels best for YOUR squat. More retroverted, you probably like a wider stance and your feet turned outward more. Anteverted, you might not need as wide of a stance. I encourage you to play around with what feels the best and strongest for you!

Other than of course rounding your back and not maintaining a neutral spine, here are a few common mistakes I often see:

#1
Knees are not in-line with the toes. If you set up too wide, as you squat down, your knees will be inside the width of your feet and move inward placing uneven pressure on the knees.

#2
Not using even weight distribution between the big toe and heel of your foot. The foot has an arch. The arch is a very strong structure, use it! If you squat through just the heels, I often see the toes lift off the floor. When this happens, you’re likely not using your quads as much and relying on the hamstrings and glutes more. Now there is the opposite, having so much forward weight shift that your heels lift off the ground. This can place more pressure on the front of the knee and possibly cause some pain if done all the time with heavy loads. 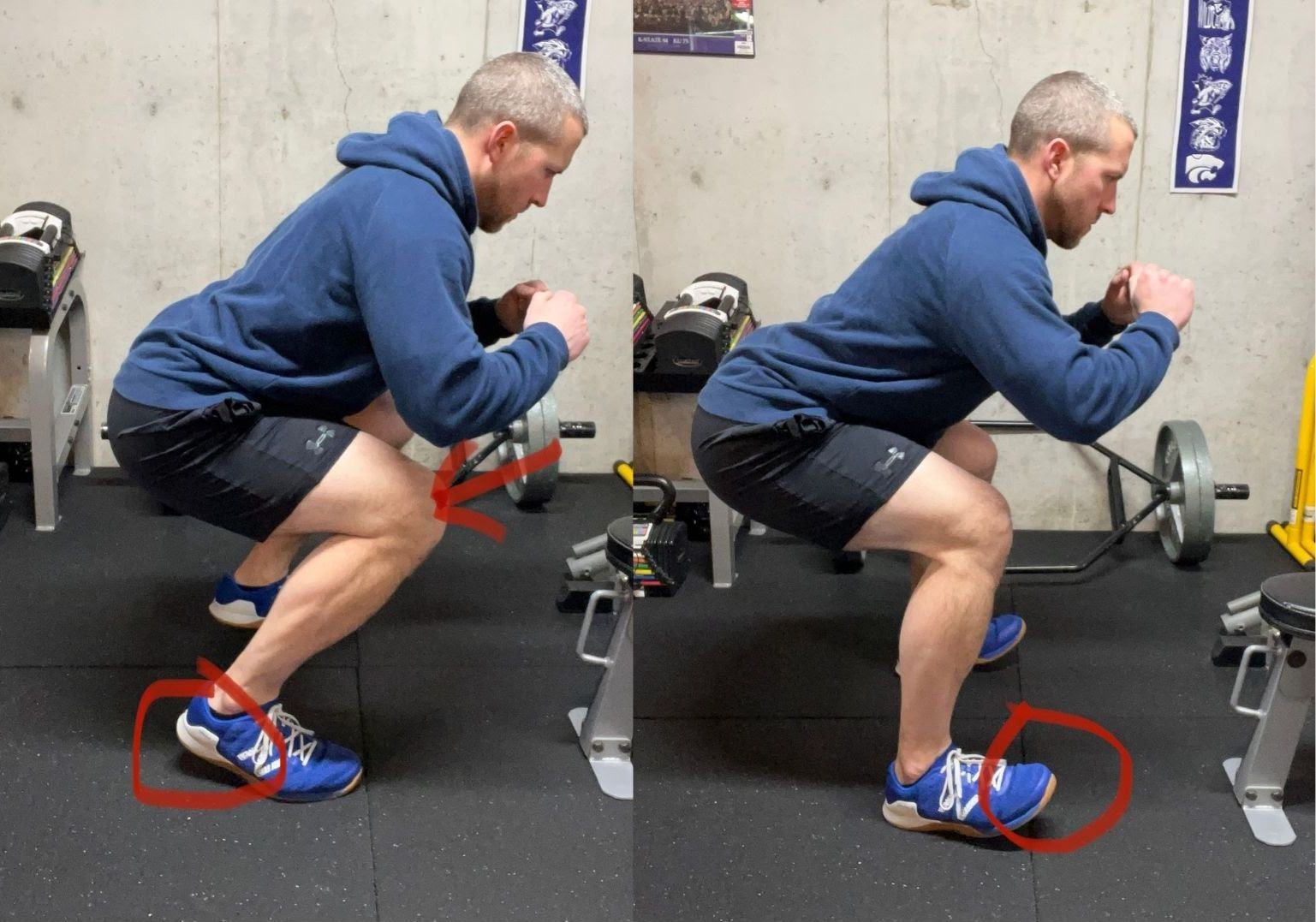 #3
Not allowing the knees to move forward. There used to be a lot of fear of squatting where your knees move forward past your toes. In fact when I worked in a gym, I would hear group fitness instructors yelling it out to their classes. If you don’t allow your knees to move forward, your shin angle is too vertical and any further movement deeper into a squat is from the hips, making it look like a hinge instead. As long as your foot stays planted and you remember #1 and #2 above, there is no concern. 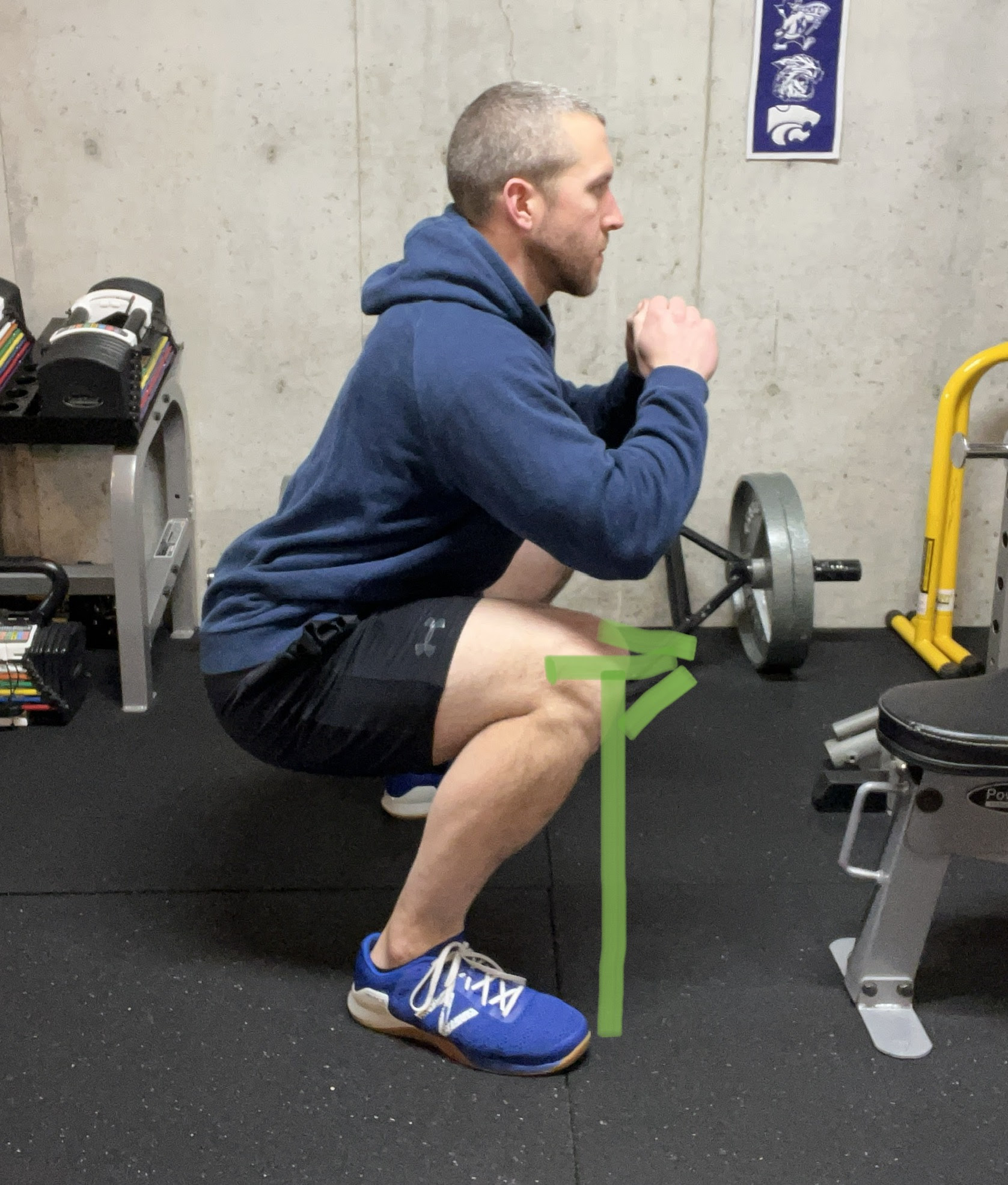 I hope that helps, mastering any movement takes time and lots of practice. Nobody has a perfect squat on day one!